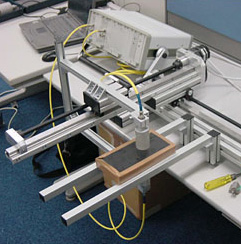 During the last decade, air coupled ultrasonic testing has advanced from being a laboratory curiosity, of little practical application, to a point where it is a viable technique for many manufacturing inspections. With appropriate equipment, it is possible to perform sensitive inspections for defects such as voids, cracks and dis-bonds in a wide variety of water-incompatible materials.

During the last decade, air coupled ultrasonic testing has advanced from being a laboratory curiosity, of little practical application, to a point where it is a viable technique for many manufacturing inspections. With appropriate equipment, it is possible to perform sensitive inspections for defects such as voids, cracks and dis-bonds in a wide variety of water-incompatible materials. Originally used primarily for aerospace composites, the applications have been extended to cover a variety of materials where conventional NDT methods are not normally considered suitable. Diverse applications of the technique include wood, foams and missile propellants. A variety of frequencies can be used, allowing optimization for resolution or penetration as with „conventional“ ultrasonic testing. Most applications of air coupled ultrasound have been for single channel C-scan systems, testing flat panels. In this context it is normally used as a direct replacement for water-coupled „squirter“ probes, and installing air-coupled probes and instrumentation on an existing system so as to inspect a wider range of materials is generally a simple procedure. The results are often indistinguishable from those obtained with the water coupling; Figure 1 shows results from inspection of a „knot“ in timber.

More recently the use has been broadened. In particular multi-channel systems have been developed allowing very rapid inspection of large composite panels at a rate approaching 1 m2 per minute. The current challenge is to overcome the requirements for high transmission power, thus allowing a portable instrument of uncompromised performance to be developed. This technology shows considerable promise as a solution to a number of currently impractical testing problems.

Relevant physical properties of a material can often be correlated to the velocity of sound. This can be calculated by measuring the transit time through a reasonably long section of the material. Water would be incompatible with many of the materials (e.g. wood, where properties are significantly affected by moisture). Air-coupled lamb waves lead themselves well to this, since the results are reasonably predictable, there are no coupling arrangements to interfere with production speed, and the experimental setup can often be arranged so that a fairly long distance in the material can be measured, thus minimizing error. However, as noted earlier, the duration of the tone burst can be a limiting factor in measurement precision. To reduce this it is necessary to use a conventional damped probe driven with a spike or square wave pulse. This greatly reduces the overall efficiency. To counteract this extremely high power can be used (a 1200 V pulser has been tried, and a 4 kV unit is being developed). Since these applications do not typically require a rapid sample rate, signal processing can be used to further improve signal to noise ratio.

As noted above the scanning rate of air-coupled ultrasound is limited by the relatively low PRF which is possible with the long transit times in air. Typically a PRF of around 200 Hz is possible. If we accept a relatively coarse scan pitch of 3 mm as acceptable for a production test this implies a maximum linear speed of 600 mm/s and in two dimensions, an absolute minimum time of around 10 minutes to scan one square meter. The scanning assembly shown in Fig. 11 combines the results from 8 channels, each of which carries out a through transmission test. Customized software assembles the results from each probe into a single image. The end result is a combined throughput of around 1 square meter per minute, able to keep up with a high-volume production line for composite panels.