During the last year, STARMANS company have been developing an automatic system for surface defect detection on train wheels. The main goal was to develop the highly reliable system based on image processing algorithms that gives an warning of surface flaws to prevent possible future accidents.

The system is based on magnetic inspection where the train wheel is put into the magnetic field and the cracks cause a magnetic stray field. By this technique the cracks are visible and they can be easily recorded using high speed digital camera, also developed in STARMANS company.

In the developing stage, we simulated the magnetic field to find out the optimal position of train wheel in magnetic field for the best defect visibility.

During the magnetic inspection of train wheel, the surface is scanned by digital camera. The recorded pictures are promptly evaluated of our proposed image processing algorithm. Whole surface and different sizes of train wheels can be inspected.

The proposed algorithms can be briefly described in three main steps:

2. Defect detection – Defects have to be recognized from scratchy surface of train wheel. Only the flaws have to be detected “ software part

Both noise reduction and detection algorithms are based on simple mathematical equations and implemented in our developed digital camera. It means that the pictures are processed on-line, during inspection.

3. Defect classification – The defects most commonly occurring on train wheels are similar to straight line. With proposed algorithm we are able to recognize the flaw shape and consequently classified as a linear object in various slope or as an object with distinct shape (drop of magnetic particles). 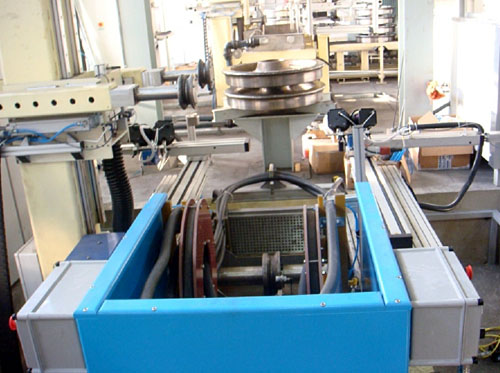 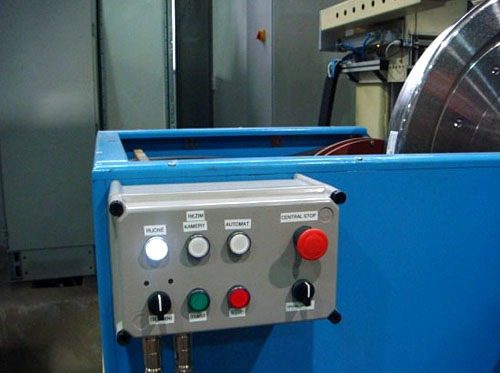 The presented automated system for defect detection on train wheels was completely developed in STARMANS company. With this system it is possible to detect the surface flaws on train wheels. The digital camera with adequate resolution was developed for the surface scanning and proposed digital image processing algorithms are implemented both in hardware and software parts. In case of flaw detection, it is possible to detect the flaws in length of 1 mm and thickness (width) of 0.3 mm. The proposed system is fully automatic and it is able to successfully detect and classified flaws. The system can be modified for special desired industrial applications.