The article gives an introduction to some important issues of a rail. The rails are an important and vital part of a railway system and are exposed, during service, to high stresses of different types, frequency and orientation and also to different environmental conditions. A brief description of automated ultrasonic inspection of rails is presented: wheel probe transducers arrangement instrumentation DIO2000 software used.

One part describes the ultrasonic testing of rails in operation and examples are given from STARMANS Electronics (Czech Republic) and NDT do Brazil (Brazil). The principle test is carried out with wheel probes equipped with transducers having a frequency of 4 or 5 MHz. The system operates in immersion technique using 24 transducers.

A special carriage was constructed. In the car, 24 pulse-echo ultrasonic channels are used, together with 70 degree and 45 degree angle probes and normal head distributed on both rails. A speed up to 50 km/h is now available.

One of the major problems, that railroads have faced since the very beginning, are failures in track. Defects in rails, as the basic part of track, may result in serious accidents. Rail inspection becomes more and more important today, with increased traffic, higher speed and heavier loads. Since visual inspection can detect only surface defects and sometimes obvious signs of internal problems, ultrasonic defectoscopy has irreplaceable role in rail inspection during operation.

In order to improve the probability of detection of most dangerous defects, straight and angle beams are used in ultrasonic inspection of rails in configurations for pulse-echo technique and tandem (pitch-catch) technique. Different arrangements of transducers provide different possibilities of inspection.

In order to provide an acoustic coupling between transducers and the rail, wheels or sliders willed with liquid are used, provided that the acoustic coupling between the wheel itself and the rail is achieved by means of sprinkled water. Such arrangement allows acceptable consumption of water, which is significantly less than using classic immersion technique with water column between the probe and object under inspection. The wheel is equipped with combination of several different transducers arranged under different angles to enable the best possible inspection of rails and detection of internal and surface defects having various orientations. 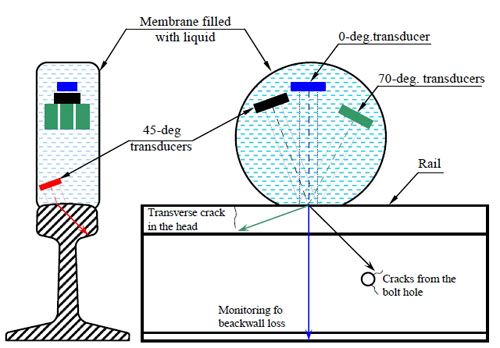 It is advisable to connect each transducer to separate channel of ultrasonic testing system. Pulse repetition rate for each channel shall be selected accordingly, taking into account the sound path in water within the wheel probe and in the required inspection depth (thickness).

Detail of the testing equipment hanged on the truck and wheel probe for rail inspection. 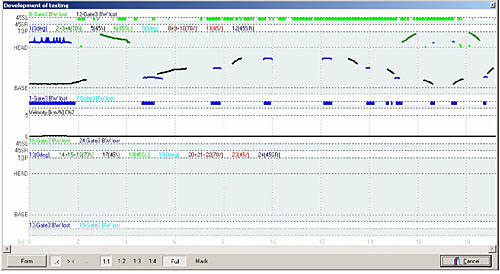 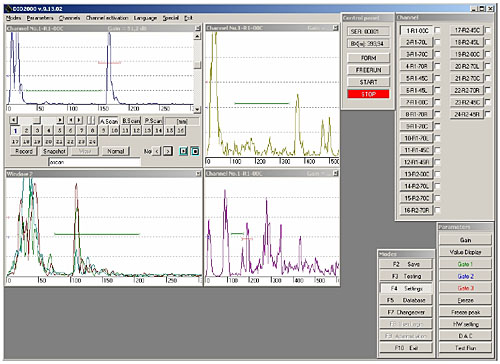 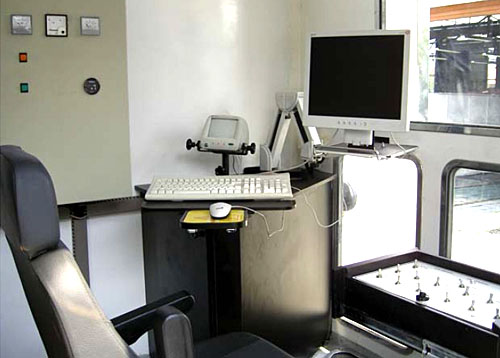 Experience with use of automated testing system STARMANS

Operational safety requires rails testing and monitoring during operation. Above mentioned automatedy system DIO 2000 is successfully used couple of years, mostly for metro rail inspection in Sao Paulo (Brazil). During that time, several serious defects, which could endanger operational fluency and safety, had been detected using this system and repaired or removed. Due to the accurate recording of indications positions, their finding and reevaluating by hand flaw detectors with contact probes and following repairs are much faster and reliable, which contributes to provision of operational fluency and safety on the track.