During the last decade, air coupled ultrasonic testing has advanced from being a laboratory curiosity, of little practical application, to a point where it is a viable technique for many manufacturing inspections.

With appropriate equipment, it is possible to perform sensitive inspections for defects such as voids, cracks and dis-bonds in a wide variety of water-incompatible materials. Originally used primarily for aerospace composites, the applications have been extended to cover a variety of materials where conventional NDT methods are not normally considered suitable.

Diverse applications of the technique include wood, foams and missile propellants. A variety of frequencies can be used, allowing optimization for resolution or penetration as with “conventional” ultrasonic testing. 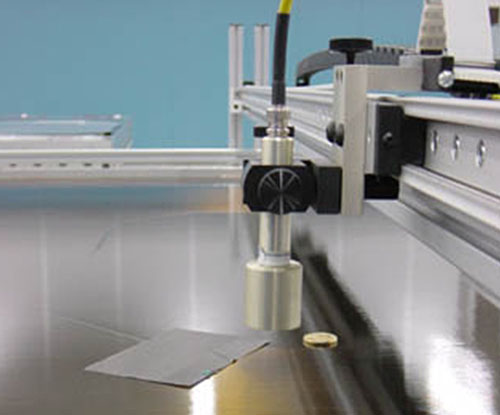 Most applications of air coupled ultrasound have been for single channel C-scan systems, testing flat panels. In this context it is normally used as a direct replacement for water-coupled “squirter” probes, and installing air-coupled probes and instrumentation on an existing system so as to inspect a wider range of materials is generally a simple procedure. The results are often indistinguishable from those obtained with the water coupling; Figure 1 shows results from inspection of a “knot” in timber.

More recently the use has been broadened. In particular multi-channel systems have been developed allowing very rapid inspection of large composite panels at a rate approaching 1 m2 per minute.

The current challenge is to overcome the requirements for high transmission power, thus allowing a portable instrument of uncompromised performance to be developed.

This technology shows considerable promise as a solution to a number of currently impractical testing problems.

When sound passes across an interface between two materials only a proportion of the sound is transmitted, the rest of the sound is reflected. The proportion of the sound that is transmitted depends on how close the acoustic impedance of the two materials matches. Water is a fairly good match for most commonly used materials, for example typically around half the sound energy is transmitted at the interface between water and a carbon laminate. After four solid-liquid interfaces (from the probe, to the couplant, to the test piece, and then back again) there is still a few percent of the original energy left so accurate measurement is possible.

Conversely if the sound has to move between the test piece and air (which has very low acoustic impedance) only around 1 % of the sound energy is transmitted. Thus after four transitions very little sound energy is left. Typically the overall path loss may be 100 dB higher using air as a couplant, than when water is used. The path loss is significantly higher with metals, which have high acoustic impedance compared to plastics which are lower in impedance.

It is therefore apparent that we must work hard to minimize losses at every stage if we are to achieve acceptable signal to noise for the inspection.

Because of the tremendous difference in transmitted and received signal amplitudes, and the inherent difficulties in achieving adequate transducer/amplifier isolation and recovery, no current air-coupled NDT systems works in single probe mode. Separate transmit and receive transducers are always used.

Where accurate imaging of defects is required the normal through transmission configuration (Figure 4) is most appropriate, as used for conventional water coupled ultrasonic testing.

In some materials, particularly laminates, better results are obtained by offsetting the probes and angling them slightly so that shear waves are produced as shown in Figure 5.

Because there is no couplant to damp surface vibrations, air coupling lends itself well to production of Lamb or Plate waves as shown in Figure 6. These can travel significant distance in suitable materials. They have two particular advantages:

Air coupled ultrasound typically operates at frequencies below 1 MHz, above this the sound transmission in air reduces, and more importantly, scattering losses in many materials become unacceptably high (typically scattering losses increase with the forth power of frequency) STARMANS have worked primarily at 50, 120 and 400 kHz. Results at different frequencies are summarized in Table 1.

The majority of the work carried out by STARMANS has been at 400kHz, but increasingly lower frequencies are being employed to test more complex composite materials.

Many different configurations are used, with thin wood panels high frequencies can be used, and extremely good imaging can be obtained, as shown in Figure 8.

Composite materials, particularly within the aerospace industry, have been a primary area of application for air-coupled (and dry-coupled) test methods. The following are among the examples of results from inspection of composite parts. These are all through transmission C scans obtaining results which will be reasonably familiar to users of conven¬tional ultrasonic testing, however many production inspections can conveniently use a plate wave configuration, giving simple “go/no go” quality assessments. This has been particularly applied to pultruded composites.

The extremely high acoustic impedance of metals, and the corresponding poor transmission coefficients for sound from air, means that metals are generally poor candidates for air-coupled inspection, however, when other circumstances are favourable acceptable results may be obtained. A system is currently being manufactured to inspect bonds in a thin (2 mm) laminated steel tube that is intended for an aerospace application.

Relevant physical properties of a material can often be correlated to the velocity of sound. This can be calculated by measuring the transit time through a reasonably long section of the material. Water would be incompatible with many of the materials (e.g. wood, where properties are significantly affected by moisture). Air-coupled lamb waves lead themselves well to this, since the results are reasonably predictable, there are no coupling arrangements to interfere with production speed, and the experimental setup can often be arranged so that a fairly long distance in the material can be measured, thus minimizing error. However, as noted earlier, the duration of the tone burst can be a limiting factor in measurement precision. To reduce this it is necessary to use a “conventional” damped probe driven with a spike or square wave pulse. This greatly reduces the overall efficiency. To counteract this extremely high power can be used (a 1200 V pulser has been tried, and a 4 kV unit is being developed). Since these applications do not typically require a rapid sample rate, signal processing can be used to further improve signal to noise ratio. 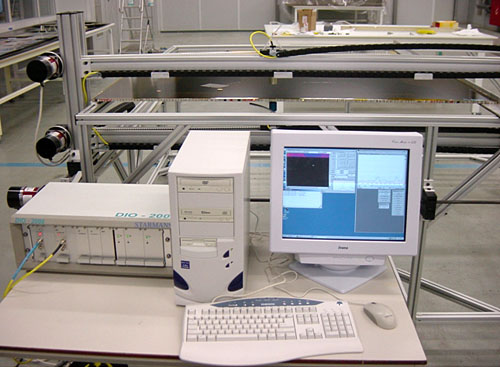 Example of equipment for inspection of solar panels

As noted above the scanning rate of air-coupled ultrasound is limited by the relatively low PRF which is possible with the long transit times in air. Typically a PRF of around 200 Hz is possible. If we accept a relatively coarse scan pitch of 3 mm as acceptable for a production test this implies a maximum linear speed of 600 mm/s and in two dimensions, an absolute minimum time of around 10 minutes to scan one square meter. The scanning assembly shown in Figure 15 combines the results from 8 channels, each of which carries out a through transmission test. Customized software “assembles” the results from each probe into a single image. The end result is a combined throughput of around 1 square meter per minute, able to keep up with a high-volume production line for composite panels. 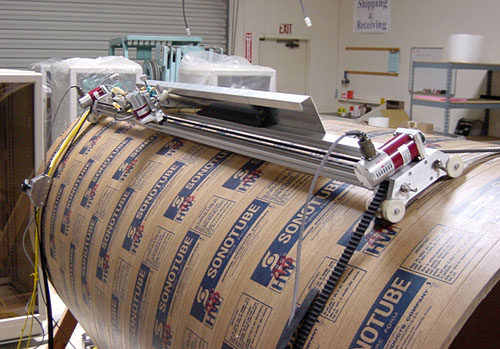 Equipment for non-contact testing of rockets 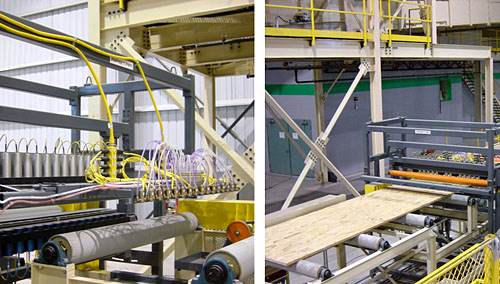